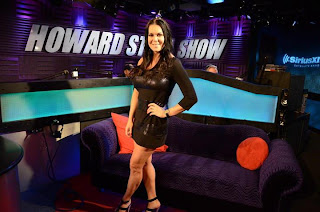 Howard asked Chyna if she has ever been with a woman before. Chyna said she had women approach her but this was her first experience with a woman. Howard asked if they had a big build up toward it. She said this movie was straight sex.

Howard said the name of this movie is ''Back Door to Chyna.'' He played a clip of this guy Billy Glide banging her. She wasn't making much noise. She did make some subtle ones though. The guy was grunting and making weird noises as he was banging her. Howard said it was a lot of guy noise. Howard said you can get the movie at Vivid.com

Howard took a call from a guy who said that he did an interview with Chyna that's out now. He said that's called ''You Shoot With Chyna'' and they ask her about the video tape that she had out years ago. He said she describes it as a rape. Chyna said that he was violating her and taking her for all she was worth so she sees it as a rape.

Howard asked if she lives alone. Chyna said she does. Howard said people don't know that she's very intelligent. She's fluent in a few languages. She doesn't speak to her family though. Chyna said that she gave her sister power of attorney and that was a bad decision. She said she wanted to pay her taxes and phone bill and all of that. She's not even sure if her parents are alive. She said that she tried to call her dad recently and she wasn't able to find him. Chyna said she's kind of sad about that.

Howard took a call from Wood Yi (Steve the Engineer clips) who asked if he could suck her cock. It was actually Sal and Richard playing the clips.

Another caller asked if there was a chance that Chyna could sing for them again. Howard said she came in and sang a song for them years ago. Howard said she sang ''Holiday'' for them. Chyna said the band broke up. She was laughing as she told him about that. Howard said she claimed that the guy was her brother. Chyna was laughing uncontrollably. She wasn't even able to answer Howard. Chyna said she thought Howard was going to sign her that day. Fred played some of that performance. Chyna was still laughing her ass off. She laughed through the song as it played.

Howard said that they tell him that she's up for riding the Sybian. Chyna said she's all itchy and scratchy but she would do it. She said she did it on Playboy radio and at the Bunny Ranch. Howard sounded disappointed when he heard that. Chyna said that the Sybian is too much for her and it doesn't really do it. Howard said Chyna is just about pants less this morning. He said that he can see her panties and things. He asked what she weighs now. She said she's at 162 pounds and she's been doing yoga for about 10 years now. She said she's still very big. Howard wrapped up with Chyna and gave her some more plugs for her porno. She's going to be at Rick's Cabaret Thursday night too. Howard went to break a short time later.
Posted by A Living Wonder at 6:58 PM