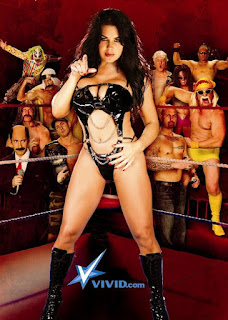 Chyna: My father used to take me to the newsstand every Saturday. I would go from Casper the Friendly Ghost and Wonder Woman to Cosmopolitan and Vogue. I love Anime and the drawings. I still can't read the comic bubbles very well! Who isn't a Superhero fan, right?

Steve Gustafson: Right! They're the cream of Hollywood right now! I've been looking at some of the screenshots from the set and it looks top notch. Playing She-Hulk meant undergoing the green make-up. How was that?

Chyna: This was one of the most physically demanding roles I have ever played due to the green makeup. It takes 6-8 hours every time, every pore covered and you get a workout just holding your body in difficult poses. That's even before you even start the scene. That is definitely grueling. However, I've never seen anything like it. Looks like I jump right off the page of a comic book.

Steve Gustafson: That it does. With a incredible cast and a huge number of superheroes featured, what was working on the set like?

Chyna:The Vivid and Axel Braun sets are the most professional I have ever worked on. This is definitely a time that I am getting to do some films I've always wanted to do. Everyone on the set was serious in the sense of delivering the best quality work we could yet we were comfortable and confident with the professionalism of the crew and the direction.

Steve Gustafson: Definitely. I've interviewed Axel Braun before and his passion for his work is apparent. He's also a huge comic book fan. How did you like working with director Braun?

Chyna: He is a perfectionist and it shows. He really cares about the quality of his work and makes the talent look like a million bucks! I love him as a director and I look forward to working with him again.

Steve Gustafson:Very cool. Everyone is also talking about your Queen of the Ring feature, which is set for release in June. What has the feedback been from the wrestling world about your parodying so many popular wrestling stars?

Chyna: I think it's fun and quite funny and it is a parody so you have to look at it with humor. Most of the guys are huge wrestling fans in the first place so that was an extremely fun set. I felt in a way like I was with a family of boys again. I loved them all and we had a lot of fun! I think all the the guys will laugh and will definitely be rooting for me! They know me! They can't say that they will watch because it's like telling your brothers to watch your porn! (Laughs) So we all just laugh about it. I am now back in contact with some of my brothers and they all support me.

Steve Gustafson: Speaking of wrestling. What did you think when you heard Hulk Hogan had a sex tape leaked?

Chyna: I thought that it is his own personal life. This family has gone through so much turmoil! I love Hulkster and think he is a very decent man. If it was leaked then pay the man. He's a class act if you ask me. That's a low blow.

Steve Gustafson: I'll be curious to see how that whole thing ends up. Any thoughts on the current state of wrestling and "sports entertainment"?

Chyna: From completely awesome to lame. They have lost all of their talent and storylines. It's like they're trying too fast or too hard or something. Just strange now. UFC and MMA are definitely taking over.

Steve Gustafson: Sports entertainment is a wild world. Look, I know your time is short but thanks again and all the best!

Chyna: And all the best to you Steve. Great questions. Thank you very much for the great interview questions. Hope to speak to you soon.