CAST FOR "QUEEN OF THE RING" REVEALED 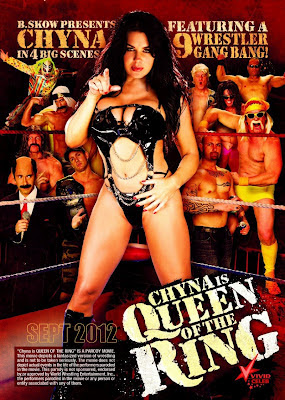 With the release of Chyna's next Vivid video "Queen of the Ring" upcoming in just over a month, Vivid.com has released the complete list of cast members including Chyna and Ron Jeremy as well as Lee and Evan Stone who also appeared in "Backdoor to Chyna". The film is due out in adult video stores Sept. 10,2012.


Film director B. Skow who also directed "Backdoor to Chyna" returns as the director of this film and explained why there has been such a long wait for the film's release. "I understand it sucks to have to wait for a movie to be released. I hate it also. Here's the reason: when a movie finishes shooting it takes about 1 week to finish paperwork and log in the footage, it takes at least a month in editing and about two weeks in sound, then a movie has to go through a legal process(especially a parody) for about 2 weeks, and last printing, Ads, and shipping. It all adds up to about 4 to 6 months."

It seems as though this film has had some legal issues during the legal process, but it looks as though the film will be released in September.