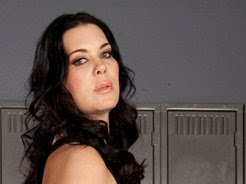 Edgewoodstudios.com has posted the following about the recent screening of their upcoming movie "Craptastic", a documentary starring Chyna & Anna Nicole about the making of "Illegal Aliens".

The Albany, NY screening of "Craptastic" the movie starring Chyna & Anna Nicole Smith last week was a total hit! "The Spectrum 8" theater brought out a much appreciated crowd of supporters who were excited to see the movie. The audience laughed and cried as they were drawn into the emotional and exciting plot of the film. With a great soundtrack filled with vibrant contemporary songs by Moby, Scissor Sisters, and Richard Barone’s own new original song "She's A Real" Live Wire" written especially for the film, guests got all that they expected and more from this exhilarating film. The night ended with a great question and answer segment done by Dave and John allowing time for the viewers to give some great feedback. The audience was truly pleased with the documentary and left the theater with smiles on their faces. The cast and crew of "Craptastic" hope to keep up the hype about the movie and continue to expand on their fan base. Thank you to all those who came out for the screening to show their support for the movie as well as the studio! It was a “Special Night” said David Giancola, the director of the film, who was extremely pleased with the enthusiasm of the crowd. This was a huge step for the movie and we hope that everyone will continue spreading the word about Craptastic!. -Edgewood Studios