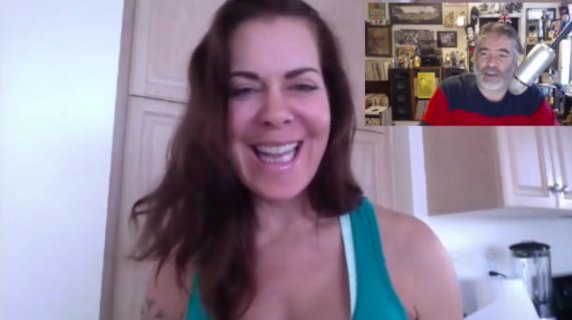 In this NEW INTERVIEW, even though Chyna is much loved and respected by Vince, that doesn't prevent him from asking the difficult questions---answers that he himself wants to understand including--what REALLY happened when she ran into Triple H at the late, great Rowdy Roddy Piper's funeral. If you saw the first interview that indeed made BRAND and MAINSTREAM history . . . you can't afford to miss this one!

Chyna appeared on "The Vince Russo Brand" show last night from her home in California. Chyna showed off part of her home and the view from her balcony. Vince mentioned how great Chyna looked and that Chyna seemed in a better place mentally than the last time she was on his show.

Chyna and Vince discussed her appeal to fans and why she is so well loved. Vince called Chyna an iconic figure and Vince talked about Chyna being the reason women's wrestling is what it is today. Chyna talked about her time in wrestling and her future plans.

Chyna said she was not sure how she was going to be received by fans when she came back but was happy to see how nice and welcoming her fans have been. She is nervous about seeing Shawn Micheals again at an appearance this month and hopes he will welcome her with open arms. She talked about how nice RVD, JBL, Jerry Lawler and Ron Simmons were to her at recent appearances.

Chyna said she is not trying to create drama, she just wants to meet with her fans and friends at upcoming events. Vince said he admired the fact that Chyna went to Roddy's funeral. Chyna said she didn't know Triple H was going to be there and she was there for Roddy only. She said the situation was awkward with Triple H. She said she not trying to make it about politics and fully sets the record straight about what happened saying she did not ambush Triple H, she was simply trying to make peace and take the high road.

The interview ended with Chyna saying "I'm trying to take accountability for whatever my part in any mayhem maybe". Although Vince did note that the WWE owes Chyna the biggest apology for their actions towards her.

The second part of the interview will air on November 16 on Relm Network. Visit vincerussobrand.com for more details!