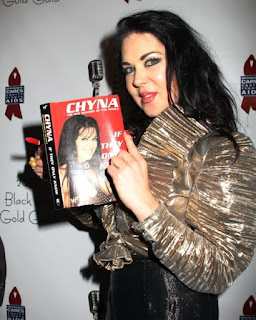 From acclaimed Emmy Award winners to stars of the current Fox hit show, GLEE, many celebrities attended the 2012 Black and Gold Gala at the LA Center Studio, making the night a huge success.

The guest list included, FRENCHIE DAVIS who is best known for her amazing vocals and charismatic personality, her tenacity and vocal range, millions of Americans became familiar with Davis through the top rated show AMERICAN IDOL and, most recently, THE VOICE. With extensive theatre work that ranges from Broadway runs of RENT to a touring production of DREAMGIRLS, Davis teamed up with fellow AMERICAN IDOL alum Ruben Studdard and Trenyce Cobbins in the 30th anniversary national tour of the musical revue AIN'T MISBEHAVIN' (which later earned the teaming a 2010 Grammy nomination). As a recording artist, Davis is featured in the Tony Moran single "You Are" which peaked at number 5 on the Billboard hot clubplay chart. Currently, she is wrapping up her first in-studio album as a solo performer. 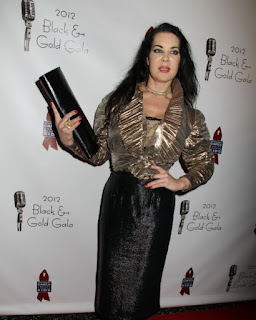 CHYNA who is best known for her role with the World Wrestling Federation, over a decade has past since Chyna last appeared in the WWF but that hasn't slowed Chyna down one bit. Very few entertainers have graced the covers of NEWSWEEK, TV GUIDE, and PLAYBOY, but former WWE star CHYNA has. From multi-story billboards in New York's Times Square to appearances on the Emmy winning THIRD ROCK FROM THE SUN and over a dozen films, Chyna is a force to be reckoned with. Chyna holds the distinction of being the only Diva in WWE history to compete, full time, in the men's division. She was the first woman to enter the Royal Rumble, qualify for the King of the Ring tournament, and be the number one contender for the WWF Championship. In 2001, Chyna released her autobiography IF THEY ONLY KNEW which spent time on THE NEW YORK TIMES' bestseller list. Currently, Chyna has partnered with the multi-million dollar entertainment company Vivid for current and future projects.

Actress LISA ANN WALTER’s career spans television, film and the stage. She is known for stand-out roles in features such as "The Parent Trap" and "Shall We Dance" and as creator and judge of the internationally popular “Dance Your Ass Off”, currently airing in over 70 countries. Her book “The Best Thing About My Ass Is That It’s Behind Me,” published by Harper Collins, is a brutally honest, comedic look at a chronic self-loather and former “chubby” girl trying to make it in the glamorous world of size “0” Hollywood. Missing her stand-up days, Lisa entertains a national listening audience through her radio gig, "The Fabulous Lisa Ann Walter Show" on KFI. She is most proud of being a working mom of 4 kids – and that her stomach is still reasonably flat after being the clown car they all came out of.

Groomed by R. Kelly and named by Sex Pistols Steve Jones. KAYA JONES rose to prominence as one of the Lead Singers of pop music's most sensational group, "The Pussycat Dolls". Leaving the group Kaya brought her own sound to the masses and has developed her own career as a solo artist in the world of pop music. Kaya appears in the music video "How Come" by D12 and Eminem and sang backup vocals for Mick Jagger on the Golden Globe winning song "Old Habits Die Hard" (also featuring Katy Perry) from the motion picture, ALFIE

DOT MARIE JONES is known the world over as Shannon Beiste on the Fox show, GLEE. With an extensive body of work appearing on such landmark shows as MARRIED WITH CHILDREN, DESPERATE HOUSEWIVES and NIP/TUCK, she was honored in 2011 with an Emmy Award nomination Outstanding Guest Actress in a Comedy Series for her stellar work on GLEE.