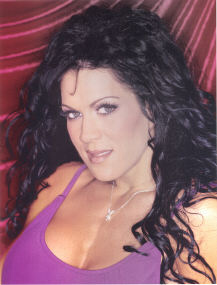 This alluring, dark-haired beauty is an accomplished actress known as Chyna who got her start in the World Wrestling Federation. She convinced millions of fans that she typified the mythical Amazon woman and was dubbed "The Ninth Wonder of the World", treading where no woman had gone before. Indeed, Chyna is an amazing woman with a commanding presence and loyal following who has overcome obstacles and has emerged victorious from life's never-ending challenges.

Before the lights, cameras, contracts, and headlines, before worldwide recognition, Chyna began her life in suburban, middle class Rochester, New York. Her household was beset by alcoholism and domestic disputes. She sought refuge and release through weight lifting and aerobics. This is where Chyna found her niche in the world of fitness. As the only female in the gym Chyna always stood out, but developed bonds and friendships with the local gym members that gave her the encouragement to keep going in the world of fitness.

She broke all gender barriers everywhere she went and continued her love of fitness throughout her college days. Chyna graduated from the University of Tampa with a 3.9 GPA and a double major in Spanish Literature in under two years. She has also studied forgien languages and can speak English, Spanish, German and French.

Chyna is a true humanitarian. Chyna served in the ROTC and she appreciates diverse cultures and has developed her communication skills by working for organizations such as US AID, The Organization of American States, The Peace Corps and most recently the Latter Day Saints Church in Japan. 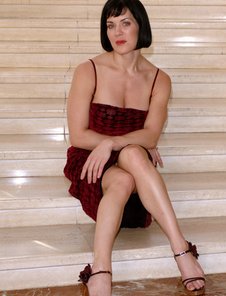 Throughout her life Chyna always dreamed of being an entertainer. Chyna began her career in the early 90's as a belly dancer and soon moved on to fitness competitions but found her true calling in professional wrestling. She began training to be a professional wrestler under the guidance of Killer Kowalski in a school of all men. Chyna soon took the world of women's wrestling by storm and began competiting in the PGWA where she was named the 1996 rookie of the year and won the women's championship.

After dominating the world of women's wrestling Chyna made her world wide television debut in February 1997 and she soon went on to break all gender stereotypes by competing with some of the toughest men in the World Wrestling Federation. Chyna would go on to smash barriers by becoming only woman to qualify for the Royal Rumble and King of the Ring tournaments and became the only female Intercontinental Champion and the only undefeated WWF women's champion in history.

After spending many years in the WWF Chyna moved on to make history again by being the first woman in the history of New Japan Professional Wrestling Company to not only participate in their events, but by fighting the number-one male wrestler in Japan in front of 63,000 people at the Tokyo Dome, and millions watching at home. Chyna competed for the New Japan world title and tag team titles. This feat was simply unheard of in Japan. Her 2002 Tokyo Dome match against Masahero Chono earned her the title of Nikkian Sport's 2002 Women's Wrestler of the Year.

Chyna has always shown that women don't have to fit traditional stereotypes to be feminine and sexy. Her two appearances on the cover of Playboy Magazine resulted in two of the top ten best-sellers of all time. Showing strength, femininity, intelligence and sex appeal, this magazine was supported by men and women both young and old. Chyna discussed her experience in detail in her Playboy video/DVD documentary and shared behind-the-scenes footage and exclusive celebrity interviews. Chyna's amazing physique has led her to the catwalk in New York City's fashion week extravaganzas, representing Lane Bryant and Los Angeles Celebrity Cat Walk For Charity, representing New Leash on Life Animal Rescue. Even though Chyna's physique is nothing typical, her attitude of self-confidence and self-assurance is quite a positive appeal to mainstream America.

Her fitness video More Than Meets the Eye is still today a popular exercise video among fitness buffs and fans alike. The video focuses on Chyna's true roots in health and fitness and her quest for the real Wonder Woman physique.

In her best selling autobiography If They Only Knew, she discussed what it took to make it to the top and showed the world what she had overcome in her life to make her one of the most well known pop culture icons in the world. Many years later she released a coffee table book called, Paper Doll which featured poems, and high fashion photos of Chyna. The book would go on to reach number 4 on the Barnes and Nobel's Best Seller's List.

Chyna's appeal is worldwide. She has appeared on virtually every prominent talk and radio show. Featured in hundreds of magazines, Chyna has been seen on everything from TV Guide to Newsweek to Iron Man and Playboy.

This variety exists throughout her acting career, as well. Chyna has hosted a variety of shows, displaying her eclectic and vibrant personality in such shows as Robot Wars, AMC Classic Theatre, E! TV and many others internationally. Comedy seems to be a natural through her appearances on Mad TV and Third Rock From the Sun and in movies like Illegal Aliens, The Cougar Club and Frank McKlusky CI; however, there is nothing funny about Chyna's ability for butt-kicking action, as she has demonstrated on numerous shows like Tracker, Relic Hunter and feature films like Hunter Back in Force, Romp and Alien Fury. Chyna has additionally appeared on numerous reality shows such as Surreal Life, Fame Games and Celebrity Rehab. 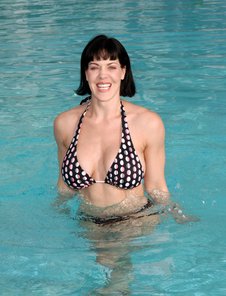 Chyna has been featured on Reggie Benjamin's CD 2X-Centrix, performing drums and back up vocals. The CD single Ride reached number 5 on the Billboard Dance Music Charts. Shortly after she formed her own rock band named The Chynna Dolls and performed concerts the The Roxy, Elrey Theater, Hollywood Athletic Center and two performances on the Howard Stern Show. She also worked with the bands Love Child and Seven Dust appearing in music videos for the bands.

Despite much success in the entertainment world, Chyna was troubled by past relationships and abuse. After releasing 4 top selling films with Vivid Entertainment including Backdoor to Chyna and She Hulk and winning the Fleshbot Cross Over Award Chyna left the United States after finding herself batteling many demons resulting from many traumas of her past.

After hitting rock bottom, she ended up on her feet in Japan. Teaching foreign language for three and a half years while meditating, doing yoga, and getting her life together. In 2015 she came back to the United States to redeem herself and reclaim her identity.

She has begun a world wide media tour which started in New York with several appearances on Sirus Radio, Vice Sports, Inside Edge TV and she is now appearing at Collector Shows and conventions and she films her journey for her new documentary The Reconstruction of Chyna which is set for release in late 2016, early 2017.

All characters that great actors portray are limited creations and not real. They come and go. On the other hand, Chyna, the actress, model, wrestler, author, intellectual and humanitarian is boundless. She will contribute to her art, society, and flourish through life. Chyna the role model is not a fantasy. Chyna is a real heroine for all ages.

Keep up to date with the latest on Chyna at her new website http://www.therealchyna.com. For media requests please e-mail AA@GoodGuysEnt.com