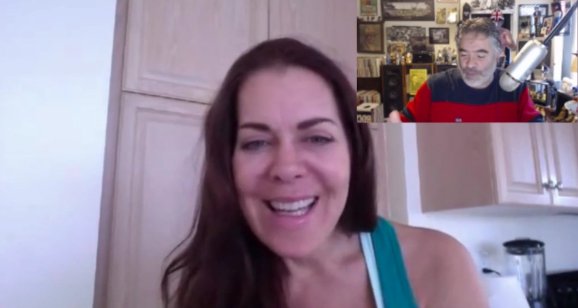 The second part of Chyna's interview on "The Vince Russo Brand" is now available online! Check out part 1 and 2 at vincerussobrand.com. The interview was touching and insightful. Chyna talked about future plans including her TV appearance with E! entertainment in the near future, The Reconstruction of Chyna and much more!

Chyna talked about getting some therapy, trying to move on from the WWE and forgive. Chyna said she was trying to get past drama and just wants peace.

Chyna stated after all these years she is starting to realize what she accomplished in the world of wrestling and talked about "The Reconstruction of Chyna" and said the story is about the journey she has been on to rebuild her life. Chyna stated she watched the Amy Winehouse documentary and was in awe of Amy's story but said she wants her journey to rebuild her life to be a good story with a happy ending.

Vince stated he was proud to see Chyna overcome all the ups and downs and hoped she wasn't upset if she didn't get into the Hall of Fame. She said she didn't need the vindication of Vince McMahon. Chyna said if the Hall of Fame happens, it happenes. If it doesn't she would be ok with it but that for the fans and for herself she wanted to pursue it. She said she accomplished so much and was very proud of her accomplishments.

She talked about her old youtube videos and said people took a lot of them too seriously and joked about how she never expected to be on TMZ over one from last year.

Vince asked her if she would return to the ring, Chyna didn't dismiss the idea of an occasional match for a special event. She said she has been in the ring with the best male wrestlers and doesn't have a dream match because she has had her dream match.

Chyna announced she would be on an episode of the TV show, "Botched" on E!. She stated she got her breasts redone to be smaller and had a scar on her abdominal removed. She said the show was a classy show and was a good story. She said it will be the season 3 premier and will continue to work with E! in the future.

Chyna said moving to Japan allowed her to detach. "People knew who I was but they didn't come at me. There was no one camping outside of my house." She said living in Japan saved her life, allowing her to escape the media bubble. She said she found religion in Japan and has a clear head after many years.

Chyna talked about her current plans to continue to do appearances at Comic Cons, and Wrestling Events because she loves to meet fans and is able to make a living off of wrestling appearances and plans on doing more TV shows with E! and is in negotiations with a wrestling company for future appearances.